David Pascoe's Books - Availble Worldwide - Directly from Us and Retailers

David Pascoe has performed over 5,000 marine surveys, both pleasure craft and commercial.

He was born in Cleveland, Ohio where he began training as a marine surveyor with his father's firm of Lovell, Pascoe & Botton at the age of sixteen. There, he trained in pleasurecraft and commercial marine, as well as general insurance adjusting in the years 1965 through 1972. He gained experience with yachts, cargo - including commodities, and bulk cargoes - as well as CGL and seaman's injury claims. In 1971 he was appointed as a Correspondent to the American Institute of Marine Underwriters and was certified by the National Association of Marine Surveyors in 1973.

The firm opened a Fort Lauderdale office where he was transferred in 1972 and developed a specialization in yachts. He spent several years as an Official Measurer for the North American Yacht Racing Union and then spent two years studying with the Westlawn School of Yacht Design. He crewed extensively on the ocean racing circuit, including the notable maxi-racers WINDWARD PASSAGE and SOUTHERN STAR.

Among his major construction projects were the supervision of the 106' Denison "ASTRA DEE," the 96' Broward "FELICITY" and 98' Custom yacht "BLACK SHEEP." In addition, he has been involved with refits on numerous smaller boats and yachts.

His work has led to extensive travels throughout the U.S. Bahamas, Caribbean, South America and to Japan and the Pacific Rim where he performed survey work for a major Japanese Company.

David Pascoe has been a guest lecturer at Florida International University on the subject of marine surveying in 1989 and 1990 and is the author of many magazine articles over the years. He traveled to Japan in 1993 at the invitation of Nippon Ocean Racing Committee (NORC), where he gave an address titled "Marine Surveying in the U.S."

He is a former South Atlantic Regional Vice President of the National Association of Marine Surveyors.

In 2012, David Pascoe has retired from marine surveying business at age 65. 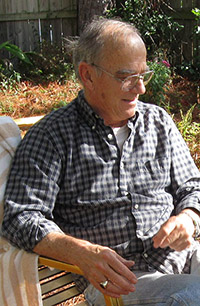 About his writing activity

David Pascoe wrote most of his online articles for the site from 1997 through 2001, with less frequent postings thereafter on subjects that had specially interested him for decades, such as use of high tech composite materials on boats.

Starting 2001, his focus shifted to finish his books and published 4 books in following 4 years.

In fact, his first book "Surveying Fiberglass Power Boats" was originally to be published from a major marine books publisher in mid 1990s.

Unfortunately the publisher's requests to modify the contents to broaden target audience reached the point that the book would become useless to his intended audience, aspiring marine surveyors. And he pulled the plug.

Updated version of the book was published in 2001 from his own company. And other 3 books followed.

Beyond his expectation, his books have gained popularity both in the US and worldwide.

Forum threads on his passing:

Buyers' Guide to Outboard Boats
Selecting and Evaluating New and Used Boats
Dedicated for offshore outboard boats
A hard and realistic look at the marine market place and delves into issues of boat quality and durability that most other marine writers are unwilling to touch.

Surveying Fiberglass Power Boats
2nd Edition
The Art of Pre-Purchase Survey The very first of its kind, this book provides the essentials that every novice needs to know, as well as a wealth of esoteric details.